I am pleased to be able to announce the winners of this award..

For the Best Dissertation in Rhetoric, Writing Studies or Discourse Studies in 2013, the winner is Ghada Chehade. Honourable mention goes to Meaghan kittle Autry and Daniel Richards. The committee had this to say:

“As a committee, we reviewed five dissertations that together projected a very bright future for the the field of writing and rhetorical studies. The dissertations differed widely in subject matter and methodology but were uniformly strong. It was a difficult decision—the words “dead heat” were used several times— but in the end we have awarded the CASDW 2014 Dissertation Award to Dr. Ghada Chehade for her thesis, “Anti-Terrorism Discourse and the War on Dissent: A Critical Analysis.”

As a pragmatist, I am tempted to think that the problem of flooding can be communicated and addressed without having to invoke the terms climate change or global warming. That is, I want to say something like: Regardless of whether or not we disagree about why the earth is warming, surely we can agree that Hampton Roads VA is ill-equipped to handle any variation in sea-level rise. I mean, look–it never has been historically and it still isn’t today: 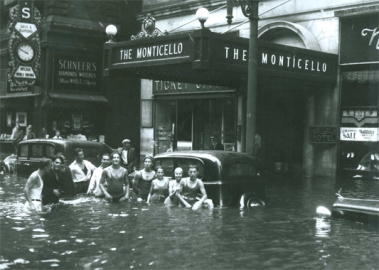 But while avoiding climate terminology and focusing on the effects of sea-level rise might seem effective as a way to pass legislation (it has–just ask former VA governor Bob McDonnell), even the most cursory glance at reader comments on related stories relates the notion that simply not uttering “climate change” in discussions of flooding in local regions is not sufficient to change the mind of those opposing the implementation of adaptation and mitigation measures. The connection to the initial causality, to the reason why climate is changing is integral to the discussion of even basic adaptation measures, such as levies or road construction projects.

It is tempting to focus solely on the “what are we going to do” question (especially since the two images above are from a hurricane [in 1933] and normal rainfall). But it’s important to note here that “getting things done,” as evidenced by the article linked above, is broken up into two categories: passing legislation and changing people’s minds. The pragmatist approach of extracting climate change terminology worked for passing legislation, but it won’t necessarily work for individuals.